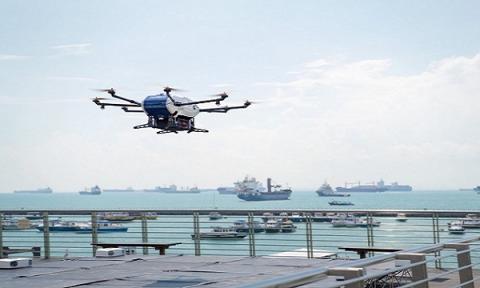 The two companies pointed out that this marks the first time drone technology has been deployed in real port conditions, to deliver a variety of small, time-critical maritime essentials to working vessels at anchorage.

After depositing its cargo to the shipmaster, the Skyways unmanned air vehicle returned to its base, with the entire flight taking within ten minutes.

Though small drone delivery trials from tugboat to ship have been conducted before by a number of shipping companies and service providers, shore-to-ship delivery of this range and scope has never been explored, prior to this trial, Wilhelmsen Ships Services (WSS) noted.

During the trials, Airbus’ Skyways drone will lift off from the pier with a payload capability of up to 4kg, and navigate autonomously along pre-determined ‘aerial corridors’ to vessels as far as 3km from the coast.

“Less labor dependent than delivery via launch, autonomous unmanned aerial vehicles (UAVs) can potentially reduce delivery costs by up to 90% in some ports and have a smaller carbon footprint than launch boats,” WSS said.

“The now proven, seamless operation of drone deliveries from shore-to-ship, in one of the world’s busiest ports, proves the hard work, investment and faith we, and indeed our partners, placed in the Agency by Air drone delivery project over the past two years was not misplaced,” Marius Johansen, VP Commercial, Wilhelmsen Ships Agency, commented on the successful first delivery flight.

“We are thrilled to launch the first trial of its kind in the maritime world,” Airbus’ Skyways lead, Leo Jeoh, said.

“Today’s accomplishment is a culmination of months of intense preparation by our dedicated team, and the strong collaboration with our partner, as we pursue a new terrain in the maritime industry.”

The Maritime and Port Authority of Singapore (MPA) is facilitating the trial, which started in late November 2018, through the interim use of Marina South Pier as the launching and landing point for Airbus’ delivery drone. At the same time, MPA has designated anchorages for vessels to anchor off Marina South for the trial. The Civil Aviation Authority of Singapore is also working with Wilhelmsen and Airbus to ensure safety of the trials.